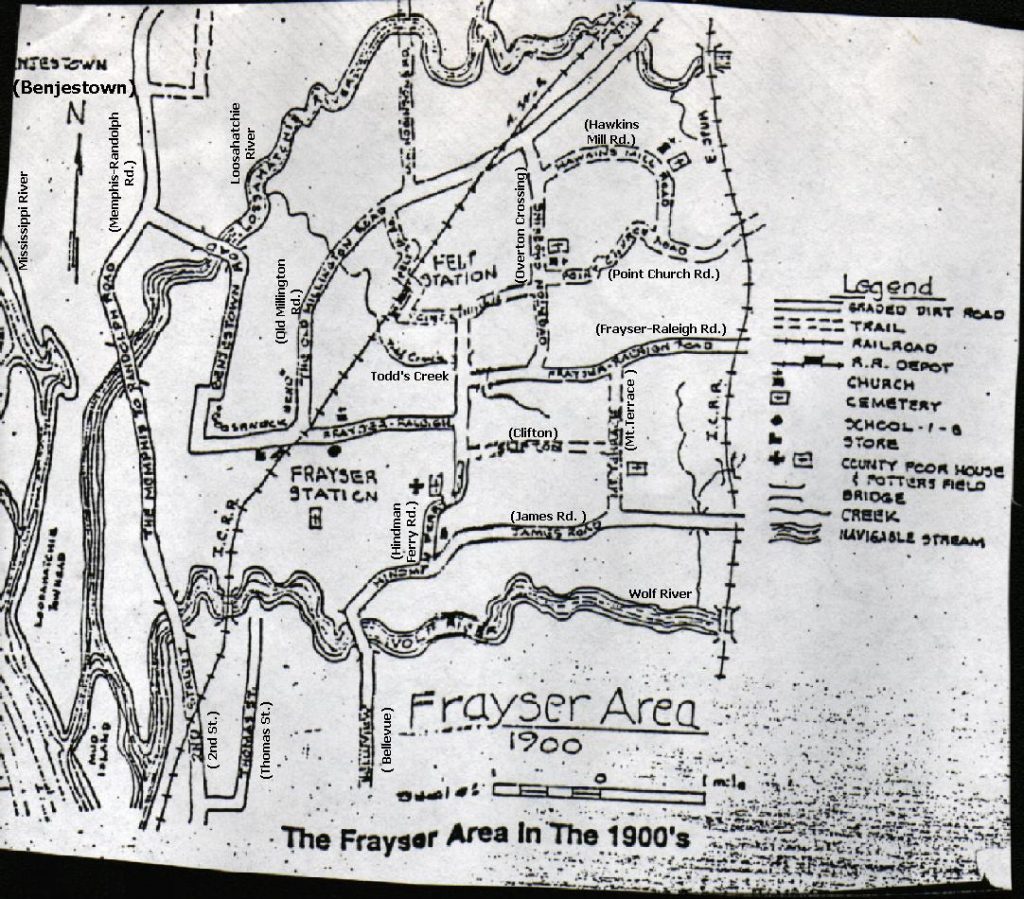 My brother, Dwayne, my Nephew, Jeff, and I have been having a discussion about Hindman’s Ferry Road. We’re not sure which of today’s roads (if any) was Hindman’s Ferry. Jeff decided to ask Vance Lauderdale, Contributing Editor of Memphis Magazine, about it. Below is some of their email exchange:

I’ve heard of Hindman’s Ferry Road, but (like you) I hadn’t thought of what became of it — or who Hindman was. Back in the early 1900s, one of the things hindering the development of Frayser was the Loosahatchie River, which separate it from Memphis, and there were no bridges across it. Ferries were the main way to cross, until the county erected the Highway 51 bridge.

One of my colleagues wrote a detailed history of Frayser some 20 years ago, which we published in Memphis magazine. It was full of details that most people don’t know — such as the fact that an English company called the Rugby Development Corporation started a subdivision there and actually constructed four very nice (and rather large) homes, much like what you’d find in Memphis’ Central Gardens, before they went bankrupt. Several years ago, I went exploring and discovered that at least three of those original homes were still standing.

I’ll see if I can find that article, and also see what I can find out about Hindman’s Ferry.

Thanks for thinking of me.

Vance, my name is Jeff Byrd and I grew up in Raleigh-Frayser. My family moved to Frayser in the 1950s. Both my grandfathers and many other men in my family worked at IH.

Recently my uncle, who is a bit of a Frayser history buff, asked us if we’d ever heard of Hindman’s Ferry Road. We had, but we didn’t remember how. I see the road on some old maps and it appears to ME to either be where Watkins is today…or maybe Overton Crossing.

Can you help flesh out our family discussion with any details that could tell us more about what happened to Hindman’s Ferry road in what is now Frayser?

When I was a small child, my dad had a house built near Hindman Ferry on what was then called Delano Road–probably one house lot from the corner. I would love to find an old map of the area as it was then. There were several rental homes on Hindman Ferry across the street from us as well as Grady Brooks’ Grocery Store. Delano Road was a dead end street and our house was the only one on it. I have searched far and wide to find a map and have found nothing except something from the early part of the century (1900).

I remember when the Wolf River bridge collapsed and we would walk down Hindman Ferry to see it, but can find no record of that.