Where Is Todd’s Creek

Okay, so it’s not River City. But close enough.  Some call it “Bayou City.” And this makes me sort of right at home as I grew up literally on the bank of a bayou back in Memphis, Tennessee. Of course, we didn’t call it a “bayou.” We called it “The Ditch.”  It’s real name was “Todd’s Creek,” which I sometimes call just “Todd Creek” (leaving out the possessive). Or sometimes call it by it’s real name; just depending on the weather. Or as Mike Hanson used to say, “Whether or Not.”

Where Is Todd’s Creek?

I grew up in Frayser, a community on the north side of Memphis. Frayser lies between the Loosahatchie and Wolf Rivers, which both feed into the Mississippi; thus forming a sort of “peninsula.” In the old days I remember there were only two ways to get downtown from Frayser; over the North Watkins Bridge or over the Thomas Street Bridge. There had been another bridge closer to the Mississippi, the 2nd Street Bridge; but it got wiped out in the floods of 1928.  It’s since been rebuilt. (For a brief conversation about Hindman’s Ferry Road, see this post.) 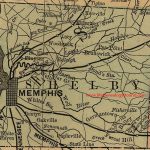 The two maps here depict what Memphis and Frayser looked like in the late 1800’s and in 1900. The hand-drawn map focuses on the Frayser community itself. The other shows a larger view of Shelby County, extending south to the Mississippi state line; and north to the Tipton County line; and east to the Fayette County line.

In the near center of the hand-drawn map, you can see the caption “Todd’s Creek” has been typed in. Look carefully, though, and you can see the map maker penciled in “Todd Creek” (without the possessive). Thus — seemingly for over 100 years, there has been some confusion as to what this creek is really named.

We lived literally on the bank of Todd’s Creek. After passing our backyard, the creek continued due west, under Steele Street bridge, and then eventually under the ICRR tracks, after which it turned to the north, and then wound its way to the Loosahatchie River, which then emptied into the Mississippi. 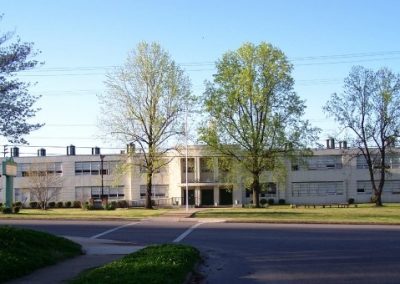 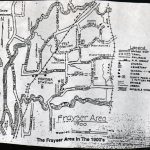 The Illinois Central Railroad goes right through Frayser and was instrumental in the establishment of the community. There was a station (Frayser Station – near the intersection of Thomas and Whitney  which is shown to the right.)  and yet another to the north. This other station, called Felt Station, was literally about  1/2 mile from where I grew up on the bank of Todd’s Creek.

When we were just little boys of 6 or 7, we’d sometimes go down to where Felt Station Road crossed the ICRR, and we’d lie in the weeds across the tracks from an old African-American holy roller church. This was two or three hundred yards north of what we called “The Little Store.” (Some called it “The Little White Store. It was later also known as “Provines.”). We’d lie there hidden in the weeds and listen to them get filled by the Spirit in that church. They’d sing and shout, until they sounded like they were going to bring the down the house.

Meanwhile, back on our part of Gowan, the creek ran east and west behind our house, but turned to the north just west of the ICRR tracks. Frayser Station (at Whitney and Thomas Street) was probably about 3/4 mile from where we used to live at 3121 Benjestown Road west of Thomas Street and about a mile or so from the Mississippi River), prior to our moving to Gowan on the north bank of Todd’s Creek.

The following recap of Frayser’s history is from a planning document prepared in 2003 by the Memphis and Shelby County Division of Planning & Development’s Comprehensive Planning Section and the Memphis Division of Housing & Community, along with researchers at the Graduate Program in City & Regional Planning, University of Memphis.

Frayser was first settled in the 1820s when farmland was purchased from individuals who had been awarded land grants by the State of North Carolina prior to the creation of Tennessee.  The name Frayser comes from Dr. J.W. Frayser, a Memphis physician, whose summer home was close to a train stop that came to be known as “Frayser Station”.

A train went through Frayser to Covington along the route of today’s Illinois Central passenger line by the 1870s.  In 1870 a general store opened on Randolph Road off North Second Street.  In 1877 a post office was established close to Frayser Station.  Access from Memphis to Frayser in the late 19th  Century was via the train or a plank toll road and ferry when the road was under water (Hindman’s Ferry Road).

Italian farmers began arriving in the 1880s and joined with earlier settlers to expand truck
and dairy farming in the area.

In 1892 Shelby County built a hospital for vagrants on Hindman’s Ferry Road, the site of the county morgue and potter’s field.  The hospital was called the “Pest House”.

The first urban type subdivision was platted in the 1890s by a Birmingham real estate company and named Rugby Hills Estates.  Several streets were graded with the main arterial in the middle of the development later named Overton Crossing. The company built a private water and sewer system, and with a powerhouse built in 1910, created a railroad line across the Wolf River – the Memphis to Rugby Electric Company.

After selling 600 of the 900 platted lots, the Rugby Estates Co. went into receivership in 1914 with only five houses having been constructed.  Shelby County purchased the rail bridge, took up the tracks and built a road, which later was named Watkins.

At the start of the 20th Century Frayser had a manufacturing operation at the corner of Frayser-Raleigh and Hindman Ferry Roads that supplied bricks for the Memphis market.  The Standard Brick Co. employed about 50 people many of whom lived in tenant houses next to the brick kiln.

A bridge across the Wolf River extending Second Street was built in the early part of the 20th Century and in the 1920s a bridge extending Thomas Street (U.S. Highway 51) northward was constructed.  In 1935 the Second Street bridge washed away and was not replaced until 1976.

With three Wolf River crossing points in the 1920s and early 1930s (Second Street, Thomas and Watkins) Frayser developed slowly.  In 1926 the Catholic Church built the Church of the Madonna and in 1929 Our Lady of Sorrows was dedicated.  The Church of Madonna was converted to a monastery in 1932.

By 1940 Frayser had two commercial centers.  One at the intersection of Whitney and Thomas serving West Frayser and the other serving Rugby Hills at the top of the hill at Overton Crossing and Clifton.

In 1942 International Harvester announced plans to construct a manufacturing plant on 260 acres west of Benjestown Road and on the bluff overlooking the Mississippi River floodplain.  The plant opened in 1948 with 1,600 employees and by 1950 had three shifts per day with 2,690 workers.

During the 1950s and 1960s Frayser experienced its greatest growth.  In addition to the Harvester plant, businesses south of the Wolf River, such as Firestone, created demand for home building in Frayser.  By the early 1970s International Harvester’s workforce reached its peak at 3,250 employees.

The population of Frayser grew from 2,450 in 1940 to 16,000 in 1953.  With this growth, the demand for public schools increased.  The Frayser Elementary School had been built in the 1930s but no high school existed until Frayser High School was built in 1949.  In 1952 West Frayser School (Westside) opened.  The Westside Junior and Senior High Schools were added in 1959.

The growth of Frayser in the early 1950s attracted additional commercial development.  The second Holiday Inn in the world opened on Thomas St., and in 1955 the Belz Corporation opened Northgate Shopping Center on Thomas north of Whitney.  This shopping center was one of three suburban-type community shopping centers built in the Memphis area during this period (the other two were Poplar Plaza and Southgate).  These centers featured early shopping alternatives to downtown Memphis and were the forerunners to the enclosed regional shopping malls that developed in the 1960s.

Between 1953 and 1960 Frayser’s population increased from 16,000 to 29,776, an 86% growth rate.  During the 1960s Frayser grew almost 50% to 44,440 in 1970.  The 1980 population was 47,299, which is the peak population recorded by the U.S. Census. The City of Memphis annexed most of Frayser in 1958 after debates lasting almost 10 years.  In the early years, many residents favored incorporation but as the 1950s unfolded, a majority of residents felt the fire and police services, garbage collection, sewers, parks and schools provided by Memphis would be superior.

During the same year that Frayser became a part of Memphis, a work stoppage by the United Auto Workers shut the Harvester Plant for 13 weeks.  The strike was one of several over the years.  A six-month strike in 1979-1980 dealt a final blow to Harvester’s sagging sales and profits.  In 1980 Harvester’s Frayser plant lost 640 jobs and in 1982 another 850 jobs were eliminated.  The Harvester plant permanently closed in 1985

The researchers also noted the following:

During the spring of 2000 Memphis Heritage, Inc. prepared a cultural resources survey of more than 600 houses in the neighborhood east and north of the old International Harvester plant. Based on age, condition and historic significance, the survey concluded that the Shirley Park area of Frayser was eligible for the National Register of Historic Places. In addition the Memphis Landmarks Commission and other local historians have identified significant historic places in Frayser: Rugby Hills Estates, Pleasant Missionary Baptist Church, Church of Madonna/Monastery St. Clair, Point Church Cemetery, Bethlehem Cemetery, [and] Potters Field (Frayser Park)

Yellow Fever –  The Plague of Memphis:

Where Is Todd's Creek?
Jesus on the Wall
Rassling
Who Is Tommy Moore?
Quarter Beer Night
The Mayor and I