Who Is Tommy Moore?

Who Is Tommy Moore? 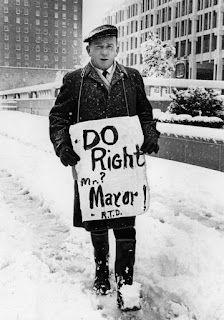 My dad worked at the local International Harvester agricultural implement plant in Memphis for many years, and was a part of the union movement that eliminated “Jim Crow” at that plant back in the fifties. One of the men Daddy worked with was a slow talking, hard drinking boiler operator by the name of Tommy Moore. Okay, that’s not his real name. He used “Tommy” because his real name is “Doris Meeks Moore.” (No, I’m not kidding.)

Tommy picketed city hall in March of 1968 in support of striking Sanitation Workers in Memphis. On that March day, Dr. Martin Luther King had been scheduled to lead a protest in Memphis, but he canceled the event because of a record 16-inch snowfall. But Tommy marched anyway. The sign he carried spelled out this message to Mayor Henry Loeb: “Do Right, Mr. Mayor, RTD.” Later, I asked Tommy what the “RTD” meant, and he explained. ‘Right To Day.’

We first learned of Tommy’s one-man protest when we opened the newspaper and saw a picture of him picketing in the snow. The caption explained that Tommy’s protest had gained the attention of Mayor Henry Loeb, who came down from his office in City Hall, and offered Tommy a cup of hot coffee.

We clipped the picture from the newspaper and pinned it in a place of honor in our family room to remind us of how much we loved Tommy, and to remind us of our obligation to support the rights of working people everywhere in their struggle for safe working conditions, respect, dignity, and fair compensation and benefits. The picture grew tattered and yellow, and eventually began to disintegrate. It was still there on the wall in the den, when I left my family’s home in 1970. And somewhere along the way, I suppose it just fell to pieces and returned to the earth, as did Tommy himself many years ago.

Over the years, though, I have never forgotten the courage Tommy showed in standing up alone to Mayor Loeb. And I pictured in my mind’s eye over and over that image of Tommy marching by himself in the snow, with his “Do Right Mr. Mayor” sign.

Recently, while researching the history of our old neighborhood back in Memphis, I did a Google search on the Harvester Plant there, specifically looking for information on UAW strikes at that plant. Using the key words, “Memphis,” “International Harvester,” “strike,” Google returned a “hit” about a “Mr. Thomas Moore, an International Harvester employee and [Memphis Sanitation Worker] strike supporter…”

I couldn’t believe my eyes. Following the link, there it was – the picture I’d loved so dearly and had missed for nearly 40 years. It brought great joy to my heart to see that image again, and to recall what a special friend Tommy was to me and to my family. I figure this is just another example of how God graces us in special ways. I had no hope of ever seeing that picture again, but through a fortuitous juxtaposition of circumstances, there it was — totally unexpected — a gift from God – warming my heart – filling me with joyful remembrances of Tommy.

Tommy was the first guy I ever saw water ski on one ski (1961 – Norfolk Lake, AR). He could grab hold of a light pole and suspend his body out in the air horizontally from it. When I was 12 years-old he taught me to drive his Corvair up at Pickwick Reservoir. He took me squirrel hunting in Brownsville, TN. and introduced me to a cute little country girl named “Madeline” I still wonder about yet today. He took me swimming in the Hatchie River; told me stories; loaned me books; let me drive his ’63 Chevy on Interstate 40 before I had a license; he loved me and my brothers very much. And he supported worker rights.

Well, they killed Dr. King, but the Memphis Sanitation workers got their union, and Henry Loeb slunk off the scene.

Thank you, Tommy & Dr. King, for standing up for the dignity of workers everywhere.

Tommy, wherever you are – we miss you, and we love you.

April, 2013: Thanks to my brother, Dwayne, for tipping me off to these two sightings of the Tommy Moore picture. One on the local Fox News affiliate in Memphis, and the other on CNN. The Fox News segment apparently lifts verbiage straight from this blog post. For over forty years that picture resided in the archives; and never until I posted about it had anyone publicly pointed out that Tommy’s real name was “Doris Meeks Moore,” and that he was a boiler operator.